Update April 1, 2019: If you are a Gruveo for Developers user and wish to migrate to Videola.io, please get in touch with us to have your API credentials activated on Videola.io.

Today, we are happy to announce the launch of Videola.io, our next-generation video chat API and SDK platform for Android, iOS and web. Videola.io builds on the success of Gruveo for Developers and separates our developer offering into a standalone and easy to understand product.

When we launched Gruveo Embed API back in 2015, its primarily purpose was to allow websites to embed the widget for the free Gruveo service. Over time, Gruveo for Developers, our developer offering, grew into a powerful platform that enables the developers to implement any kind of call scenario across various platforms. However, even though Gruveo for Developers is no longer bound to the core Gruveo service, it was often perceived as such.

With Videola.io, we’re making it clear that the platform is completely self-sufficient and is not tied to any particular end-user service like Gruveo. In fact, there is even no interconnectivity between Videola.io and the core Gruveo service.

Another reason for us launching Videola.io is stability. Gruveo for Developers shares its code and infrastructure with Gruveo. This means that whenever we need to roll out an update to our end-user service, we are introducing a risk of downtime for all Gruveo for Developers users, too. This will no longer be the case with Videola.io.

Should you decide to migrate (and hopefully you’ll want to, given the reasons provided above), we have prepared a Gruveo for Developers Migration Guide that provides answers to common questions regarding migration. To have your existing Gruveo for Developers credentials activated on Videola.io, just get in touch with us.

We are excited about the bright future ahead and invite you to take Videola.io for a spin. Check out the documentation and let us know if you need any help adding video chat to your application!

As part of our effort to streamline and simplify our Gruveo for Developers offering, we will be retiring the Basic Mode for Gruveo Embed API on November 22, 2018. Starting on that date, you will need to supply a valid client ID when initializing the embed, as well as implement token signing for the embed to work. You can apply for a client ID on our API Pricing and Signup page.

If you are using the Embed API with a client ID and the token authorization method, you don’t need to do anything.

Please feel free to contact us should you have any questions about the upcoming changes.

Up till now, Gruveo has supported a single layout for call recordings where the active speaker’s picture was automatically maximized to occupy most of the screen space. This has worked for a lot of our customers, but some were missing an option to have all call participants shown in pictures of about the same size, without the switching.

We are happy to announce that Gruveo now offers the option to use the “tiled” layout for call recordings that tiles the participant images on the screen. The new layout is available to all Gruveo users immediately. Check out the images below to compare the two layouts: 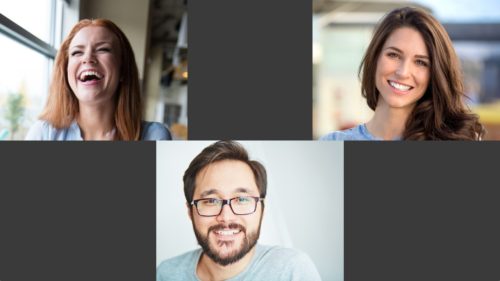 In the new “tiled” layout, all of the participants’ pictures are shown in about the same size on the recording. 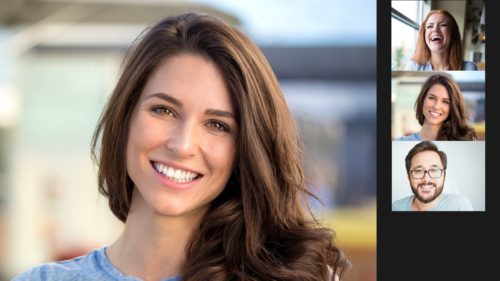 The original “maximized” layout automatically maximizes the image of the current active speaker.

To use the tiled layout for your call recordings, go to your Call Recordings page, choose “Tiled” for the layout and click “Save Changes”. The new layout will apply to any subsequent call recordings you make. Please see our Help Center for details.

Support for setting the recording layout in the Gruveo SDKs for iOS and Android is underway and will be released soon.

Gruveo developers, rejoice! The Gruveo Embed API now supports outgoing screen sharing in Chrome and Firefox on desktop. In Chrome, the user will be prompted to install the Gruveo Screen Sharing extension when turning on the screen sharing for the first time. In Firefox, no extension installation is necessary.

To provide access to this new functionality, we have added the new screenSharingAvailability event to the API, as well as extended the existing embed.toggleVideo() method and the streamStateChange event. Please refer to the JavaScript API Reference for details. We have also updated our Basic Demo to provide an example of how you can access the screen sharing functionality through the Embed API.

More Space for Your Call Recordings

We are happy to announce that all Gruveo subscribers now have 5 GB of recording space available in their account, up from 2 GB before. This upgrade comes at no extra cost for new as well as existing subscribers.

5 GB is roughly equivalent to 5 or more hours of HD call recordings. What’s more, Gruveo allows for quota overruns for the last recording made. This means that if you have less than 100% of your account’s recording space in use, you will always be able to record one more call – no matter how long it is.

You can learn more about our call recording feature in the Gruveo Help Center.