Update October 9: Click here to learn about the key features of the upcoming iOS app.

It has been a long, long wait but now it’s finally over. This past Friday, we have received that coveted email from Apple saying that the Gruveo app’s status has been changed to “Ready for Sale.” In plain English, this means that we can finally release Gruveo for iOS!

We need about a week to ensure that all our systems are 100% ready for the launch (including the inevitable spike in traffic), so we decided to set the release date to Tuesday, October 14. That’s just 8 days from today.

After spending a total of 5.5 weeks in the App Store’s review limbo, we are super-excited to be releasing the app… and we hope you are just as excited to finally be able to use Gruveo on your iPhone, iPad or iPod touch.

In a few days’ time, we’ll be previewing some of the app’s features and capabilities, so hold tight! 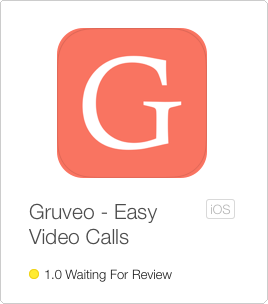 We have submitted the Gruveo iOS app to App Store almost a month ago, and, frankly, we expected it to be live for a while by now.

Well, things haven’t quite worked out that way. To start with, the approval process for that first version took full 21 days, which is extraordinary even by the App Store standards.

And then, our app got rejected because of a tiny crash that we had overlooked.

Fortunately, our beta testers made us aware of the crash ahead of Apple so we lost minimal time fixing the bug and resubmitting the app. We resubmitted last week and are now anxiously awaiting that “Ready for Sale” status! (Don’t worry, the app will be free, it’s just how Apple puts it.)

On the Bright Side…

On the bright side of things, the App Store approval delay gave us enough time to make sure that Gruveo works perfectly on the new iOS 8 and looks just as great on iPhone 6 and 6 Plus.

We have also spent some time improving our web app. In particular, there was a pesky bug with camera muting under certain conditions in a call between Chrome and Firefox. It’s fixed now.

Finally, Gruveo got its first mention on Forbes last week, which makes us super-excited!

We hope to be able to share more good news very soon 😉 Thank you for using Gruveo and stay tuned!

As promised, here are some screenshots of the upcoming Gruveo app for iOS. The app is still undergoing review but we hope to be able to announce the release date very soon. Enjoy!

Good news! We have submitted the Gruveo iOS app to the App Store this weekend, and it is currently awaiting review. Fingers crossed for a speedy approval!

If there is one thing we learned during the submission process, it is that governments take encryption pretty seriously. Due to Gruveo encrypting all of your calls, we actually had to apply for a permission from the US government to make the app available worldwide. (This is because the app will reside on Apple’s US servers, and whenever someone downloads it from abroad, “export of encryption technology” will take place.) Thankfully, we managed to get the permission very quickly.

Things turned out to be different with the French government. France has very stringent laws for importing encryption products. Making an encryption-related app available in France involves mailing quite a bit of paperwork around (in French), and then waiting one to four months for authorization.

Unfortunately, this means that the Gruveo iOS app will not be available in the French App Store at launch. We will do everything possible to release it in France as soon as possible though.

Be on a lookout for the first screenshots of our shiny new iOS app!

Gruveo uses WebRTC for all video and voice calls made using its platform. WebRTC is a free, open technology that enables web browsers with Real-Time Communications (RTC) capabilities.

Gruveo uses the browser’s implementation of the WebRTC engine and operates it via the high-level JavaScript APIs exposed by the browser. As such, Gruveo has no way of compromising the internal workings of WebRTC, including its security stack.

WebRTC is often described by the industry professionals as the most secure VoIP solution out there.

WebRTC specification requires that all transferred data – audio, video and custom application payloads – must be encrypted end to end while in transit. This is achieved by employing the following protocols:

DTLS is a privacy protocol that is very similar to TLS (SSL), but with a minimal number of modifications to make it compatible with the UDP transport used by WebRTC. DTLS enables a secure data channel between peers that cannot be tampered with. No eavesdropping or message forgery can occur on a DTLS encrypted connection.

SRTP is a secure variant of the standardized format for delivery of real-time data, such as audio and video over IP networks. SRTP media cannot be decrypted by a third party thus ensuring that IP communications across the Internet remain private. In other words, SRTP ensures that WebRTC voice and video traffic will not be heard or seen by unauthorized parties.

Finally, WebRTC is a peer-to-peer technology where calls are established directly between the peers’ devices for lower latency and added security. In some situations, a peer-to-peer call cannot be established and the call data has to travel through the Gruveo’s servers. However, DTLS and SRTP ensure that the call contents cannot be decrypted on the server even in such a scenario.

All text messages on Gruveo are relayed via Gruveo’s secure servers. The messages are relayed to and from client endpoints in encrypted form using TLS (SSL) as part of the WebSocket Secure (WSS) protocol.

The Gruveo website is only accessible via the secure HTTPS protocol.

Endpoint security is out of Gruveo’s control. For example, we cannot detect or prevent a virus running on a client machine from recording the user’s communications, on Gruveo or otherwise.

All Gruveo users are encouraged to choose longer, non-trivial codes for connecting to ensure against a random third party joining under the same code before the intended counterpart does.

Once a call between two parties has been established on Gruveo, no one else can connect to it, even if they enter the same code. Anyone connecting under the same code while you are talking will get a “busy code” message.

We hope that this has been helpful in understanding how Gruveo protects your privacy and security. If you have more questions, please don’t hesitate to contact us right away.