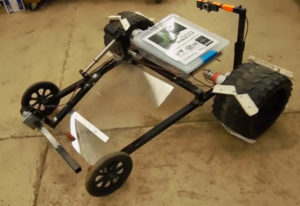 “We chose Gruveo after testing each of the major video technologies,” says Dr. Orion Lawlor, Aurora Robotics’ faculty advisor. “Skype works well off-peak but the servers are overloaded during working hours, resulting in dropped frames and connections. Google Hangouts video is solid technically but difficult to start automatically. Gruveo’s peer-to-peer connection makes it fast and reliable, and it embeds well in a web browser.”

The robot is equipped with the Acer C710 Chromebook that runs Chrubuntu, a variant of the popular Ubuntu Linux distribution. A special script on the robot launches Firefox with a hardcoded Gruveo URL. The initiated video call is then answered on the front-end laptop that is used to command the robot.

The robot is currently connected to the Internet via the infrastructure Wi-Fi, but the team is planning to switch to an LTE hotspot to comply with the competition’s requirements.

“We’ve been really happy with Gruveo,” says Dr. Lawor. “The framerate is solid, and the connection is reliable.”

Check out the Aurora Robotics prototype in the video below. The video link is shown from 1:04 to 1:29:

Gruveo can do much more for your business! Sign up for a 14-day free trial of Gruveo Pro to see how it can help your company grow. Visit Gruveo for developers if you’d like to embed Gruveo into your website or app.