Hentsū has built a transcontinental office portal with Gruveo, and we've asked the firm’s Marketing Manager, Christine Johnson, to tell us more about it.

Christine explained that it all began when Hentsū expanded to two offices in different countries and felt the need to connect the London and New York locations. After searching and trying out various other platforms, they decided to use Gruveo.

“We love it, it's been a great tool," says Christine. She continues: "Being located in New York, I love being connected to London all the time and being able to just reach over and talk to them." 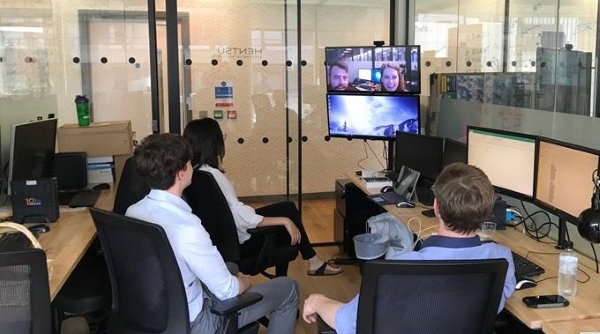 The first thing Christine does in the morning is dial into ​the portal in one of the conference rooms. Hentsū has an ongoing Gruveo video call in there, all day long, until the London office leaves. "It's part of our everyday connection with the other team. But we also use Gruveo for one-on-one calls. We have a few handles set up between the New York and London offices and we've been leveraging them for our team communication," explains Christine.

Instead of picking up the phone and calling the other office, team members just turn around and talk in real time. "The portal is like an extension of our office, a window across the ocean. That's how we see it,"​ says Christine. “It eliminates the remote distance, disjointed teams, and makes the two locations work as one big (virtual) office.”

Since they started using Gruveo, the team's morale has improved significantly and the cooperation of the teams has never been better.

Christine goes on to say, "It's nice to be able to just ask the other team members to send me something I need or to approve a document. I don't have to dial the phone and wait for somebody to answer it. I can see them, I know that they're in the office... It has multiple functions and it's awesome for just connecting with people. I feel like they are next to me even though they're over the ocean."​

She says that Hentsū is very happy with the call quality, too, and the teams don’t experience system interruptions, even though their calls are all-day-long. ​Gruveo doesn’t disconnect them, and they appreciate being able to rely on it throughout the day.

We hope you have been inspired by the creative way in which Hentsū is using Gruveo! If you'd like to explore what Gruveo can do for your business, sign up for a free trial. It's better to see it once than hear about it one hundred times!

Don't forget to share this case study with your colleagues. The buttons are at the top!